Carpe Rubber Diem! — Seize the Rubber Day!   Your fetish is a gift. Celebrate it! One way to do this is by wearing rubber mind fully and with a … END_OF_DOCUMENT_TOKEN_TO_BE_REPLACED

Many Rubberists share a common fantasy about being completely covered in rubber from head to toe, often for extended periods. They have a compulsion to seal every bit of their body into this material, often to the point of obsession. Some envision elaborate rubber suits of latex equipped with various breathing and fluid tubes, catheters, gags, gasmasks, pumps and other devices for life support. The goal is total exclusion of all perception of the external world as much as possible to allow becoming totally immersed in the rubber fetish milieu. It is a quest for a state of deep mindful immersion, of profound absorption in an ineffable, and  transcendent altered state of consciousness often described as “RubberSpace” and which clearly has a spiritual dimension. There may even be suggestions of a mystical experience at times. 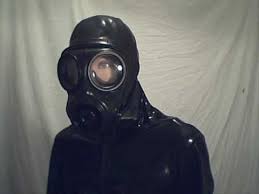 This practice is known as “Total Enclosure” (TE) and is quite common to deeper, more advanced Rubberists.  The general theme of TE is so prevalent in Rubberist fantasy literature that it is probably archetypal in the Jungian sense of the word.

While Total Enclosure may not be your forte, keep these two things in mind of those who practice it:  (1) It’s harmless. It won’t hurt or affect you. (2) the practitioners of it enjoy doing it very deeply.